Armenian cuisine is as rich, colourful and diverse as the country itself, as bright as the mentality and spirit of the Armenian people. Today, Armenia is a country where ancient and modern culture meets, but this tendency has no connection with the national cuisine: so far, national dishes in Armenia are cooked whenever possible using traditional methods. Nowadays, dishes are prepared not only according to the old recipes, but also according to the traditional technologies, most of these dishes are served in clay plates, and some of them are preferably eaten … by hand!

The first thing that attracts the tourists is a unique oven located in the ground, named Tonir where Armenians bake bread and cook meat. Armenian cuisine is based on the meat dishes, in different variations and ways of cooking. This is due to the fact that from time immemorial Armenians are masters of cattle breeding. 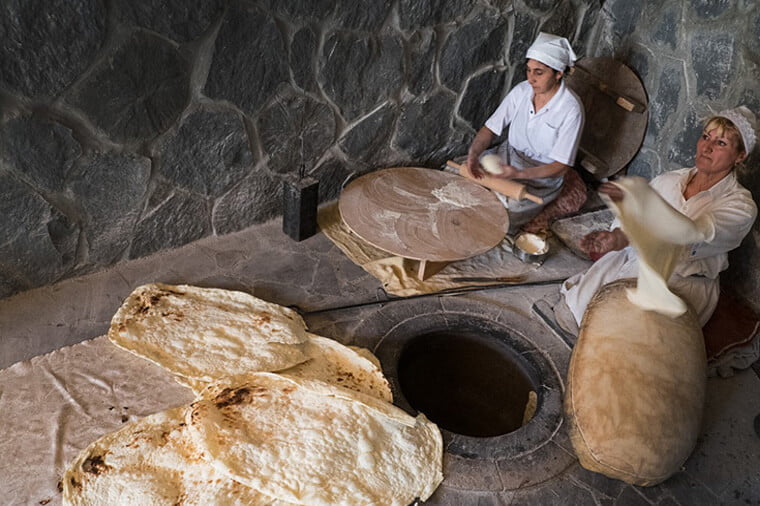 
The next meat dish is Kufta. Earlier, the ancestors of Armenians cooked it like this: they chose the best pieces of beef meat and for a long, very long time they beat off a piece of meat on a stone with wooden hammers until the meat turned into a uniform creamy mass.

Today, the principle of cooking is almost the same, only the meat is passed several times through a meat grinder. After that, the stuffing is beaten off, a spoon of Armenian brandy and a spoon of milk are added. Finely chopped onion is added to the meat.

Balls or flat circles are removed from the meat, they are thrown into boiling water, to which a glass of red wine is added in advance. If the kufta is cooked correctly and according to the recipe, the dish will be so soft and tasty that it will melt in your mouth. 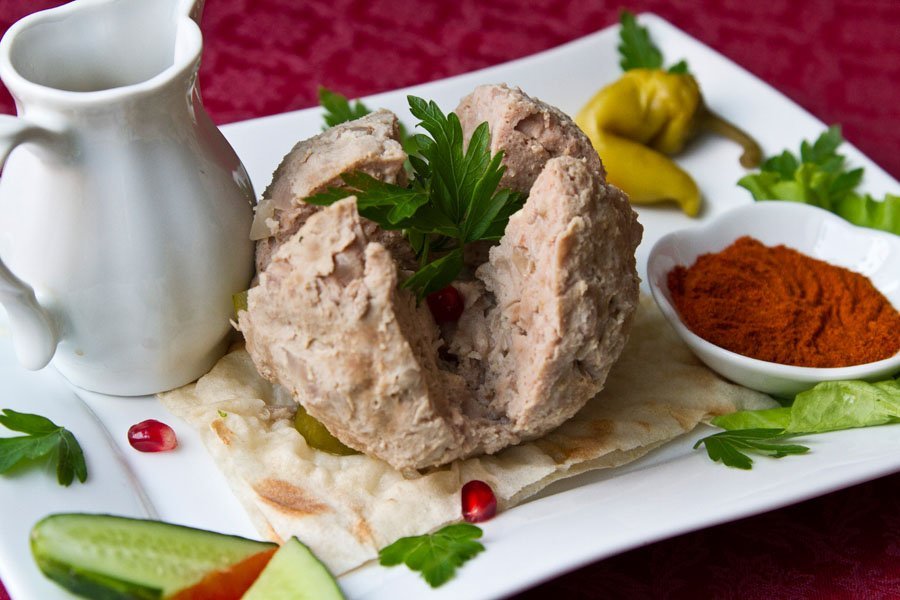 
Dolma is the heritage of the national Armenian cuisine and one of the most favourite dishes of Armenians. The composition of Armenian rolls – Dolma includes minced meat from lamb, onions, rice, greens and spices. The main distinguishing feature of Armenian Dolma is grape leaves, in which the ready stuffing is wrapped. 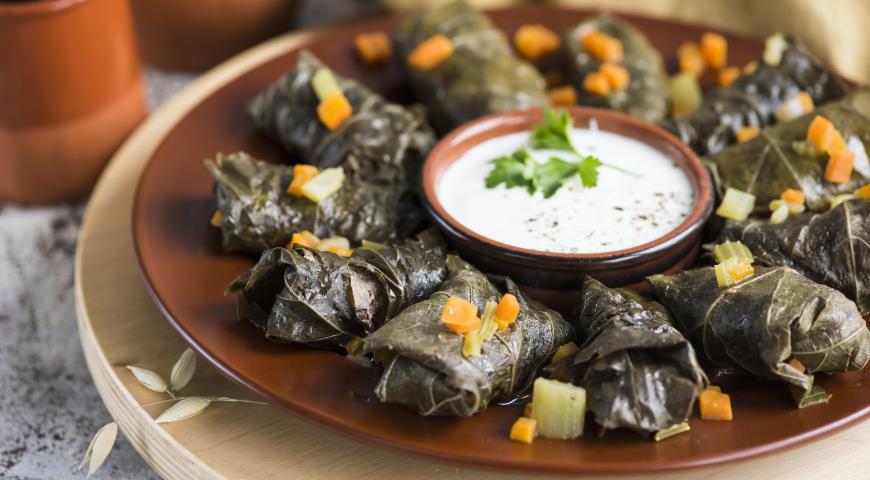 
Khash is a hot, very nourishing and fatty soup made out of beef legs. This soup is cooked for a very long time: it is put on the fire in the evening so that it will be ready the next morning.

On a small fire, the soup is cooked all night long, after which the soup with meat is served with garlic and dried Lavash (Armenian bread). Already dried Lavash is divided into small pieces and added to the soup to make it look like a porridge.

Real Khash lovers eat it with their hands: they take the mass with a piece of fresh and soft Lavash and eat it. Armenians usually drink alcohol with Khash. As the Armenians say, “Khash does not like three things: cognac, women and toasts (words said before drinking).” Soup is served with Armenian homemade pickles and olives.

It is hard to imagine that in ancient times Khash was the food of the poor! After all, today it is impossible to imagine big friendly gatherings on a winter or autumn morning without this delicious and savoury soup, which, moreover, helps from a hangover. 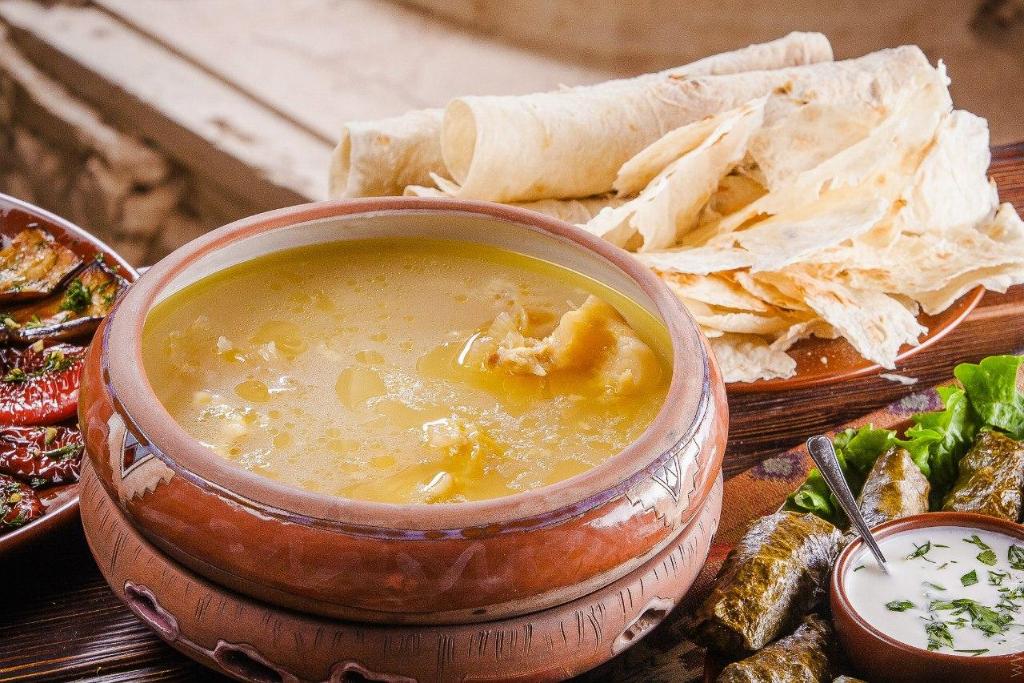 Tjvjik is a dish made out of half-roasted beef parts – heart, lungs, liver – with onions, tomato paste or tomatoes and spices. The name tjvjik is quite difficult to pronounce and it is translated as Fried Liver.


Armenians are very fond of milk products. One cannot imagine a feast without Armenian cheese and Matsun. If everything is clear with cheese, then guests and tourists have questions with Armenian yoghurt Matsun. Matsun, the most delicious milk product, is a sour and thick yoghurt full of vitamins.

This yoghurt is added to many dishes such as our favourite Dolma. Famous Armenian drink named Tan is also made out of Matsun. It is too useful as Tan helps people to recover after a hangout or even fight the stomach ache.

In Armenia, you will make many unexpected and pleasant discoveries for yourself, because this country is a storehouse of wonders, light and worldly wisdom. The cuisine of this good-natured and hospitable people is what will create in you a feeling of family and long-lasting friendship with the Armenians and Armenia. 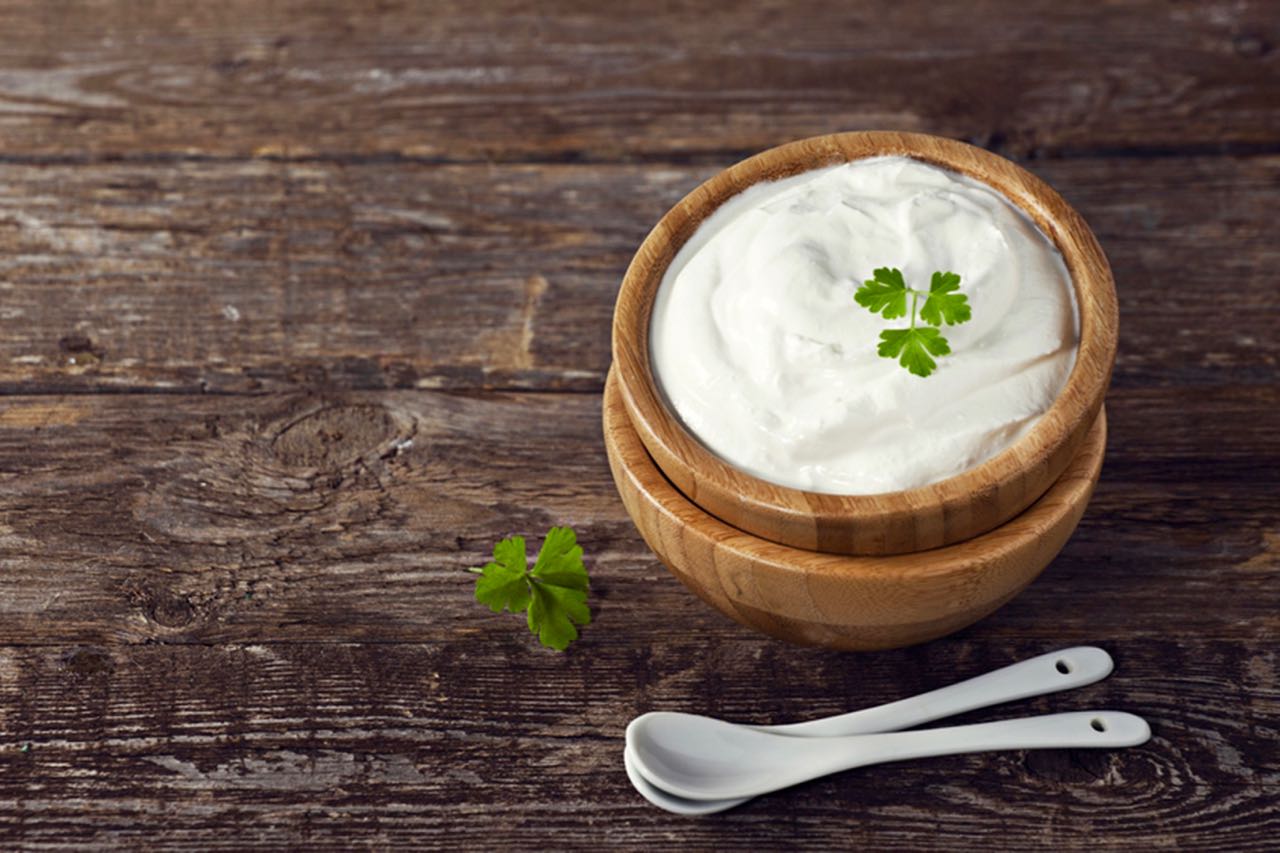 
Armenian bell – a fragrant soup with tomato paste and lamb meatballs. It turns out very fragrant, with a unique taste! 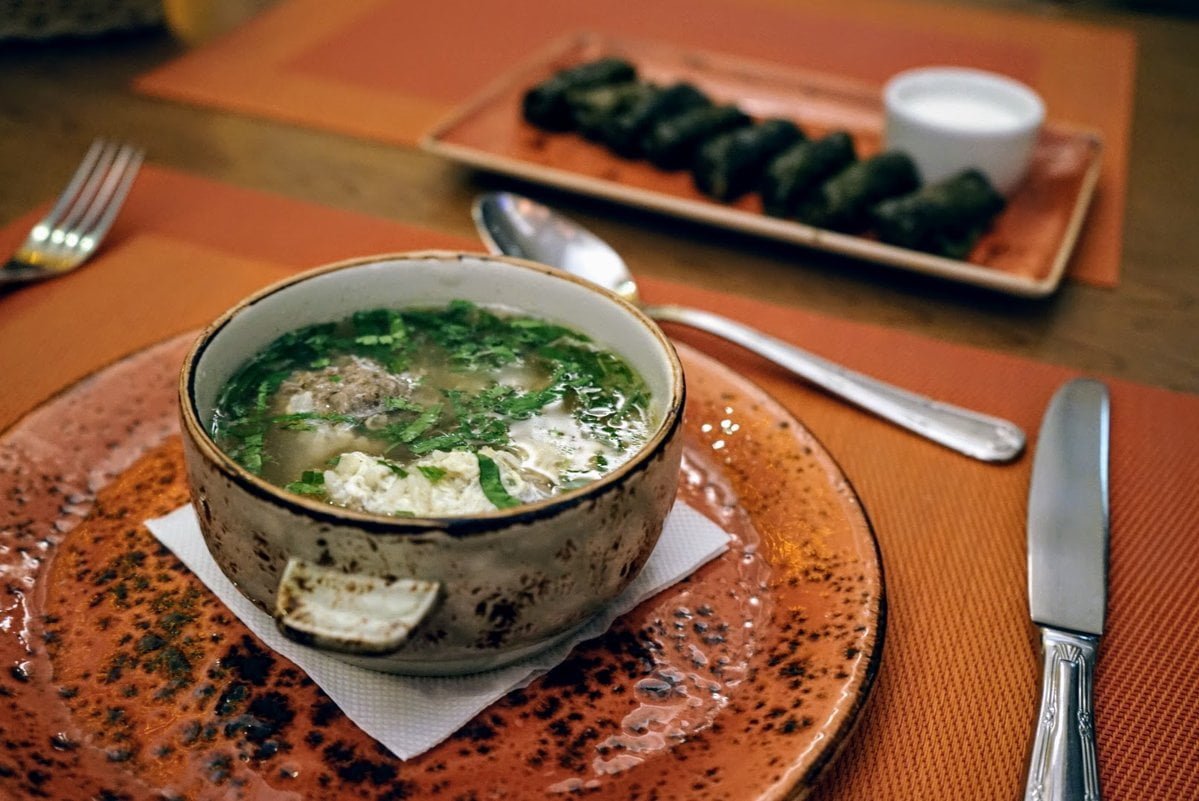 
Harissa is a traditional Armenian dish. This dish is prepared with chicken and mushrooms for a long time, to eat it with great pleasure. In addition, Harissa has a great story, and it begins with the 53-day defence of Musa-Ler.

At the time of self-defence of the Armenian population from the Ottoman genocide in 1915, the people of Musaler had nothing but the meat of lamb and wheat named korkot. Armenians began to mix wheat, meat and water, thus obtaining food to survive during self-defence.

Literally “hari-sa” is translated as “mix it.” Today after the fight was successfully won, every year on the third Sunday of September, all the families of Musaler prepare Harissa and celebrate the liberation of their village. 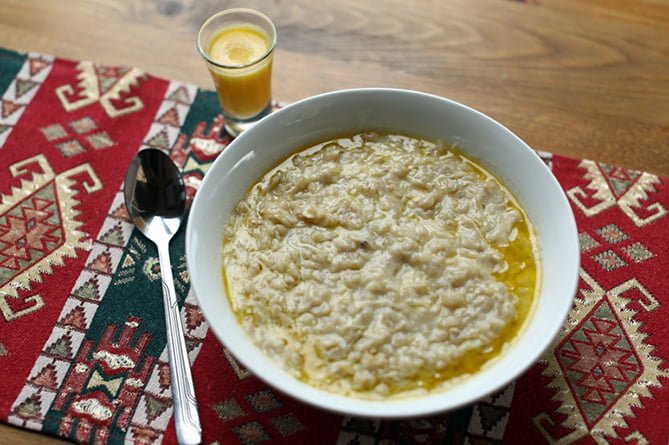 
Matnakash is the national bread that can be found in all stores. “Matnakash” literally translates as “finger draw” or “finger pull” since before baking a cake, patterns are made on its surface by drawing with the index finger. 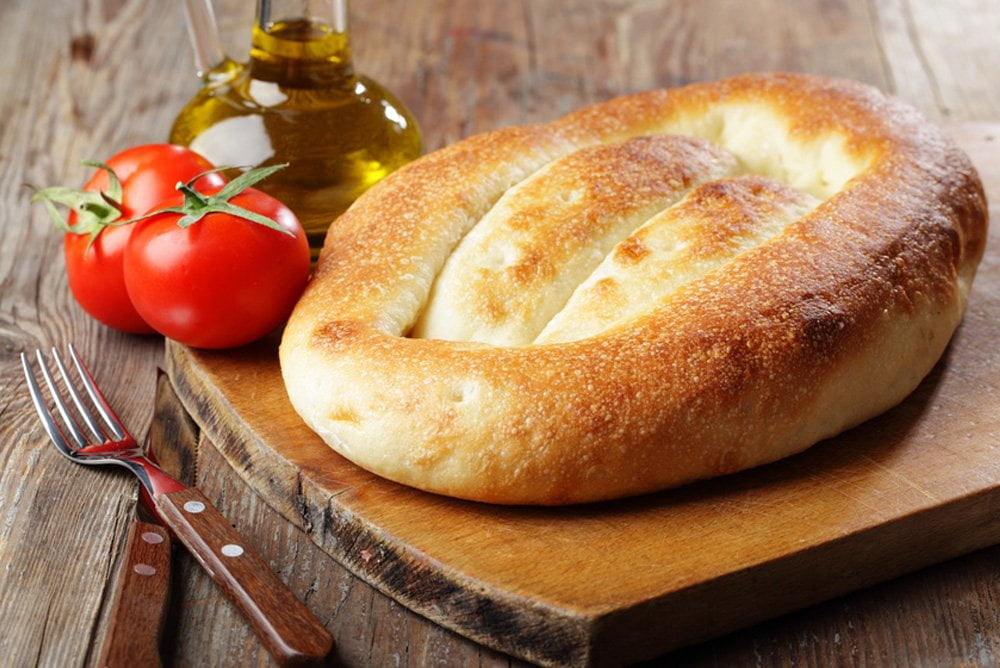 
Well, what can I say? Everyone knows about Armenian lavash, since it spread throughout the world along with the Armenians. Lavash bread is very easy to bake, but far from everyone gets a bake easily, correctly and tasty. To the delight of everyone, this bread is absolutely dietary, as it is prepared on the basis of flour, water and salt. Lavash also has its own story …

The legend of lavash

In ancient Armenia was a king named Aram. One day he is captured by the Assyrians, to their king Nosor. King Nosor announced to Aram that he would only be released on one condition: he would be hungry and thirsty for ten days, and on the eleventh day a duel between them would take place – archery. If Aram wins, he will be lowered to his homeland, and even with gifts. Without thinking twice, Aram demanded that the most beautiful shell be brought from Armenia. Assyrian messengers complied with his demand and brought, not realizing that the shell was nothing but bread lavash! And so, King Aram, expressing his dissatisfaction with the beauty of the shell, demanded a new one every day. On the eleventh day, Aram and Nosor went to a duel. What happened then – you can guess for yourself! In short, the Armenian bread and Armenian ingenuity – these are the secret of the Armenian people. ☺ 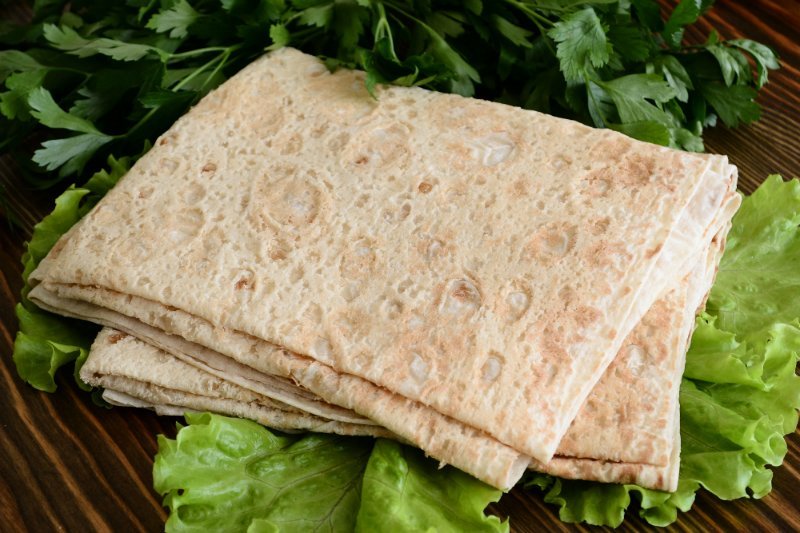 The story of Armenians and lavash does not end. Armenia is a sunny country and almost everywhere grows a lot of fruit. And Armenians found a way to process and store them: fruit lavash! In Armenia, it is also called “ttu lavash”, which means “sour pita”, as it is prepared from plums, cherries or dogwood. A sweeter option is apple, peach or apricot pita bread. You can find it in almost all markets. 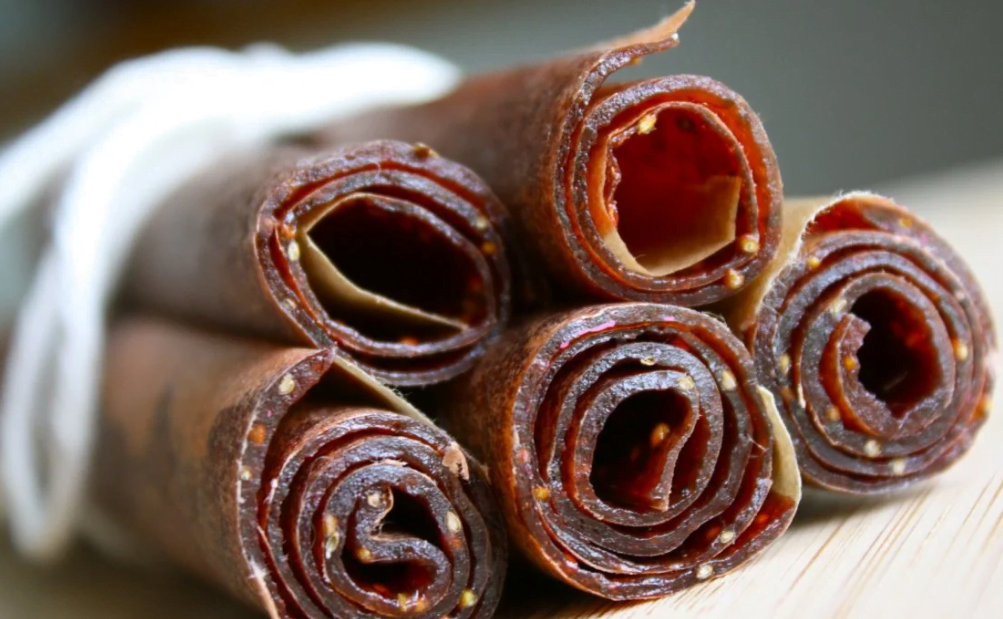 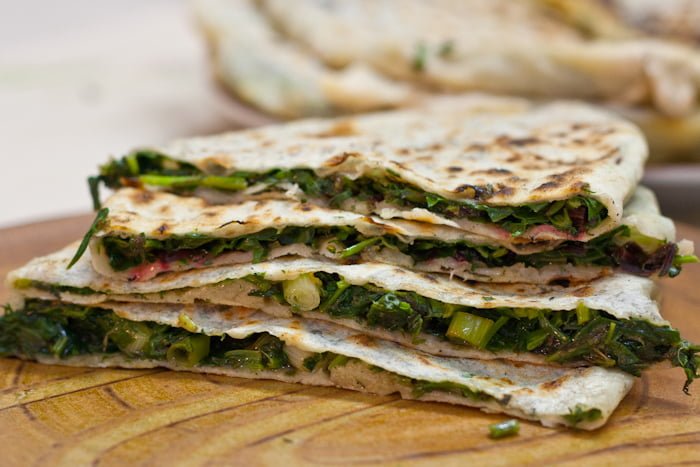 This spicy pizza took root in the Armenian cuisine and became a favorite. Why did you take root? Because the Arab troops brought it with them to Armenia when they invaded the borders of this country in VI. The conquerors left behind a kind of lamb pizza, which is eaten with lemon. This dish is not served on special occasions and on holidays, however, it is just right for satisfying hunger.

Basturma and sudjukh are the constant guests of the New Year’s table among Armenians. You will meet them on the tables of all the Armenian families without exception!

Both basturma and sudjukh are representatives of sausages, but they have a sharp taste and a memorable aroma due to numerous spices among which chaman is the most important one. If you are thinking about what to take home from Armenia with you, then these two twins are going to be your favourite guests! 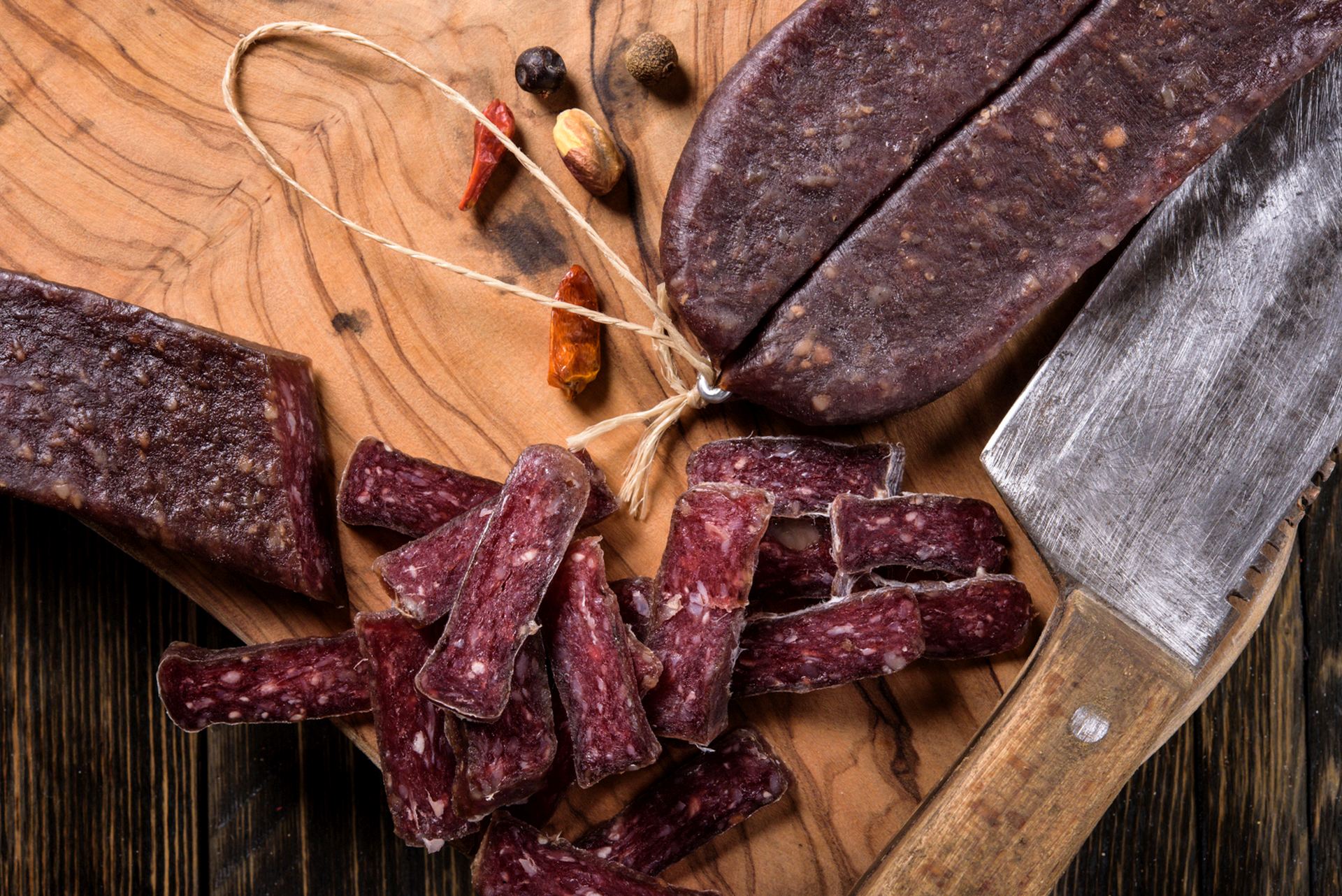 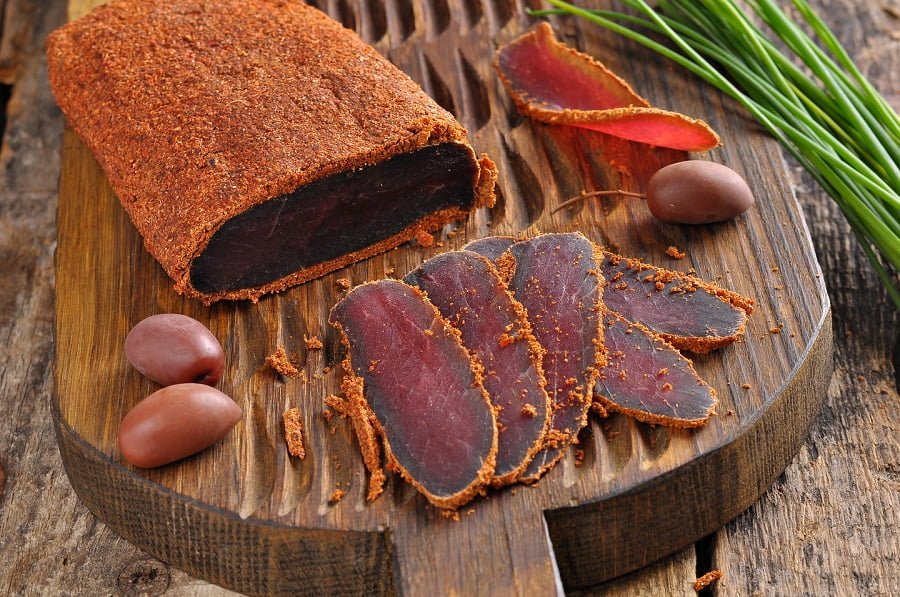 Ghapama is a traditional autumn dish that attracts the attention of all the food lovers with its taste, look colours and sweet taste. The dish consists of pumpkin, which is cleared of the filling. Then rice, nuts, raisins, dried apricots and other dried fruits and seasonings are added inside of this pumpkin.

Ghapama can rightly be considered the most beautiful and elegant dish of Armenian cuisine. Ghapama is also considered to be a symbol of peace and friendship of nations. 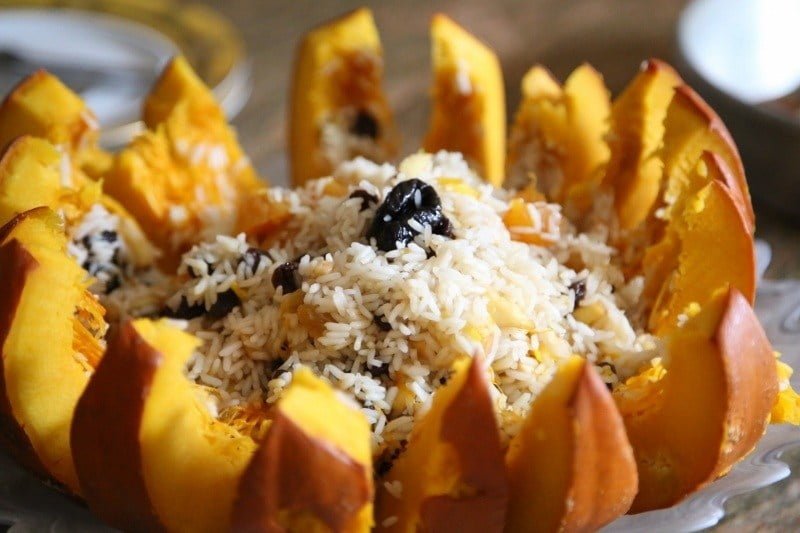 
Gata is a national sweet pastry that has a special meaning and symbolism. In almost all holidays, gata is a symbol of happiness and good luck. Gata was prepared to isolate the family from the evil eye and failures. This sweetness is also considered a symbol of family strength, therefore it is an invariable attribute and even a gift during Armenian weddings.

In Armenia, you will make many unexpected and pleasant discoveries for yourself, because this country is a storehouse of wonders, light and worldly wisdom. The cuisine of this good-natured and hospitable people is what will create in you a feeling of family and long-lasting friendship with the Armenians and Armenia.